A burn-down chart can use anything for the units, such as hours or points, but originally Scrum’s burn-down chart tracked hours of work remaining in the iteration. Many people still use an hours-based burn-down chart as their primary measure of progress during an iteration. That’s a useful tool, but it is similar to tracking yardage in an (American) football game. It measures activity, but not accomplishment. After all, what percentage of a touchdown is 30 yards?

Burning Up Points to the Rescue
The Burn-up by points chart is one of the very best tools in Agile. It brings together many of the best aspects of Agile all in one place and gives you an instant heads up as to how you are really doing. The way a points-based burn-up chart works is simple. 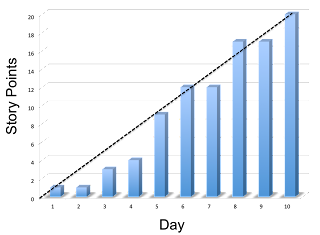 A points-based burn-up chart lets you see graphically day-by-day how much progress you are making towards your goal. It only records accomplishment, not activity, and allows you to see if you are on track or getting behind. To me, this is exactly what is meant by “Working software is the primary measure of progress.”

Won’t The Chart be Empty Until the End of the Iteration?
At first you may think that the chart will show that you are behind for most of the iteration and catch up only at the end when QA is able to start testing and marking stories as done, but whenever the chart shows something other than a steady march to the end of the iteration, here are some of the questions you should be asking:

Using a points-based burn-up chart gives everybody, from team to manager to the organization as a whole, an instantly understandable picture of the health of the project and team. It simplifies the life of the manager because if it indicates a problem anybody can stand up and say “hey team, we’re messing up, what are we going to do about it team?”

Unlike Burning Down Hours,  Burning up by Points is Fully Automatic!
You may not be ready to give up burning down hours yet, but there’s no reason you can’t use both. And most Agile Project Management tools, such as Rally and Version One, will generate a points-based burn-up chart for you automatically.

There’s one more reason you may want to consider moving from burning down hours to burning up points, assuming your user stories are small enough in general and you are mostly getting stories done all the way through the iteration. In my experience, team members don’t really like having to enter their hours remaining for their tasks every day, often forget to do it, and it keeps the focus on activity rather than accomplishment. Also, the only manual step required is to mark the story done, which helps to make the whole process much smoother.