Kanban Applied to Software Development: From Agile to Lean 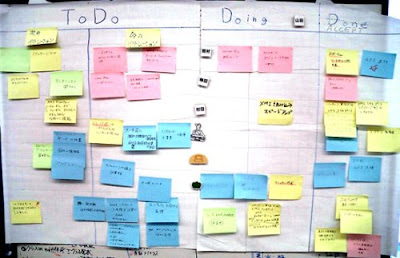 For those that don’t really know much about Kanban, I found the following article on InfoQ quite an interesting insight:

I haven’t made the jump and tried Lean with any of my teams yet. To be honest, I’ve had such great success with Scrum, across so many teams now, it’s almost a case of “if it’s not broken, don’t try to fix it”.

Having said that, I do see that the overhead of Sprint planning in Scrum is often quite onerous. Although I really value the predictability teams can achieve by estimating in points and tracking Velocity and Burndown. I’ve seen this help so many teams to deliver on their commitments, meeting expectations and building strong business relationships as a result.

But I can’t help being slightly fascinated by the idea of cycle time in Lean software development. This is the idea that a team’s cycle time represents the average number of cards – or User Stories – a team can deliver in a fixed period of time (iteration). To work best, user stories would ideally be broken down until they are all a similar size. Although not necessarily, as what’s important with cycle time is the average number of user stories that can be delivered in a Sprint. When you think about it statistically, the concept is actually very similar to Velocity.

What if a team could achieve the same level of reliability and predictability, without the need for any detailed estimating and planning? There would certainly be an increase in the team’s productivity, due to the time saved on Sprint Planning.

My sense is that doing Lean – and using cycle time to predict when things can be delivered – may well be appropriate for business as usual. Ongoing development is, by nature, more routine. And therefore the team is more likely to get into a more predictable rhythm. But for bigger projects, where costs need to be estimated in order to secure funding, and the project team is not yet established, I’m not sure if cycle time would be predictable enough?