Data Mesh on Trial: the case for and against
Data Strategy Head to Head: Which solutions are best for your business?
How to Scale Your Technology Organisation
Let the Game Commence...
Making Better Use of Data in the Path to a Data-Driven Public Sector

This week I had the pleasure of helping Emma Hopkinson-Spark facilitate a workshop with 100 people from Abcam’s Sales and Marketing team at their Quarterly Business Review. We played a game that provided insight into digital product delivery and the role they could play in the success of their product development.

It was a tight crowded room, people crammed in around tables, laptops, and coffee cups everywhere. Let the entertainment begin.  Emma explains to everyone that they need to clear the tables and arrange themselves in groups of 6-7 around 14 tables. Facilitators squeezed amongst the teams while everyone shuffles around each holding some rules and three game tins.

Emma raises her hand to bring the room into order, a bit like being in school, and projects her voice without the need for a microphone to explain that we are about to embark on a dungeons and dragons style adventure but instead of being mystical characters slaying dragons in a faraway land, we are to be product managers and developers, building an app to share funny cat videos.

After all, that is what the internet was built for isn’t it?

The silver game tins are handed out containing colourful cards and the excitement almost peaked at the sight of 20-sided dice, but there was more to come! Green character cards are selected, the purple feature cards are laid out on the table and the rules neatly tucked away on the black card, are gradually explained.  Meanwhile, the delivery manager searches in their bag for pen and paper to keep track of the app users they would hopefully acquire during the game. 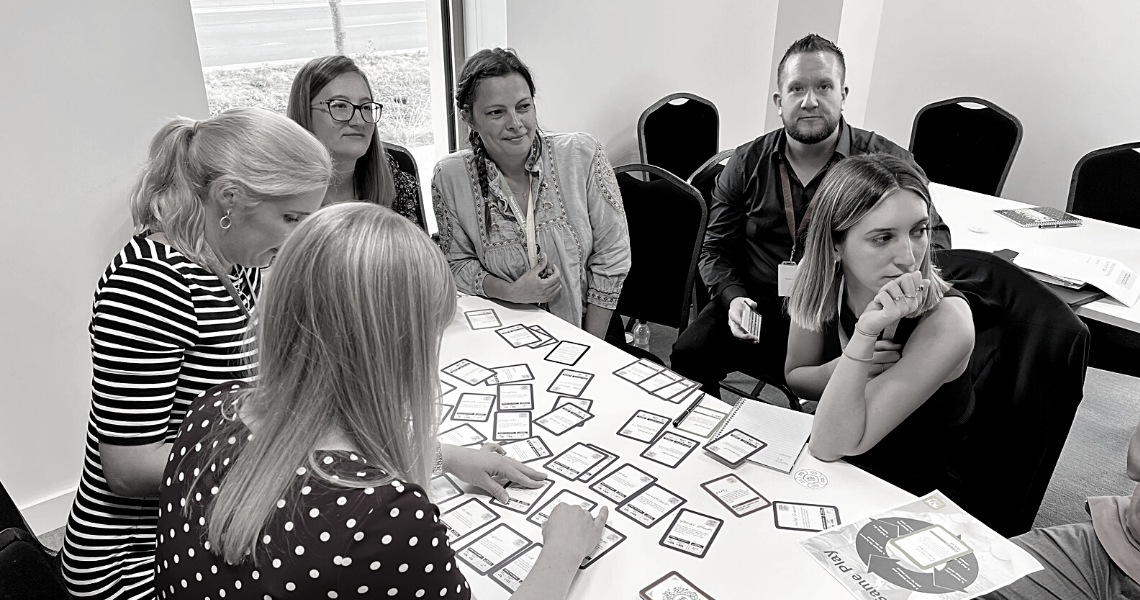 The product manager helps the team carefully select their first round of features to get an MVP product to market so that users can be acquired. How big do we make the release, do we pair developers to improve quality?  Dilemmas faced by product delivery teams every day are asked.

The dice are rolled, features are completed, or not. Decisions are made about a release and whether to take bugs into production to gain more users at the risk of reduced quality are faced. But before the release is deployed, the orange event card rears its ugly head. Sabotage is revealed. The product owner needed to roll as low as possible to minimise the user lost rolls 18 to the disbelief of the team, groans can be heard across the room as they lose 18K users!

The release is deployed successfully and 80K users are gained to the delight of the cheering team. A quick retrospective follows and strategy is adjusted, a number of rounds follow in quick succession now the teams are getting to grips with the rules.

Time is drawn on the game, a hush descends and observations are discussed.

The benefits of pair programming, why small releases are better than large releases, acceptance that software development isn’t an exact science and there are always unknowns around the corner. Discussions on the reality of the events that disrupt teams in day-to-day delivery and how doing work that doesn’t deliver new users might improve quality and stickability in the long run.

The winners are announced and prizes awarded and we reflect on how the session went. How the room was buzzing throughout the session, how the competitive nature of people resulted in cheering and groaning, how quickly teams got to grips with the rules, and how real-life situations kept being discussed.

Now, when the sales and marketing team are asked to help with prioritisation and to provide an understanding of the value of the features they want to develop, hopefully, the reasons why will be clear!