Do you know how to run a really productive meeting? I don’t. I’m learning and run meetings with various success so far. Recent insight is related to meeting group size. Let’s evaluate various sizes and extract strong and weak sides.

If you have hundreds of people all you can do as a single group is to listen. You have one presenter that broadcasts information, all the other people consume the information and digest it inside. On the picture below presenter is marked with a red color as a sign that he is the most (and only) active person here. There is a huge diversity in this group, but there is no feedback, so decision making is impossible. All you can do is listen, think of some new ideas and write them down to discuss later.

Ten on more people sitting at a single table defines a large meeting. Again, there is a great diversity among people, but… Usually several people almost silent, they just listen and do not give anything back. There are several very active people that lead the discussion mainly. The real problem with such a large group of people is that nobody can consume information from more than 1 person simultaneously. It means when somebody talk, all other should shut up and listen. Often a large group splits on smaller groups randomly and neighbors discuss something, while ignore the rest of the group. I believe it happens when people ‘feel’ the need of better communication format. Overal, it is very hard to have any meaningful decision in the end and very often the result of such meeting is to… Yes! Schedule an another meeting! 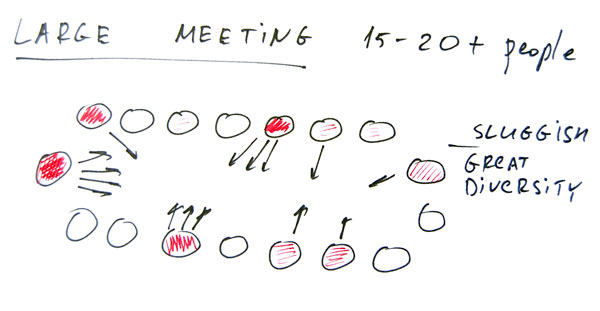 This is the real problem solver. 3-4 people communicating intensively have more chances to really get the problem and nail the decision. Communication is very dense and there are many feedback loops. You say something, I catch new ideas and say them back. Broadcast-consume-broadcast cycle repeats many times. All people are active. Everybody feels the pace and there is no place for boredom. 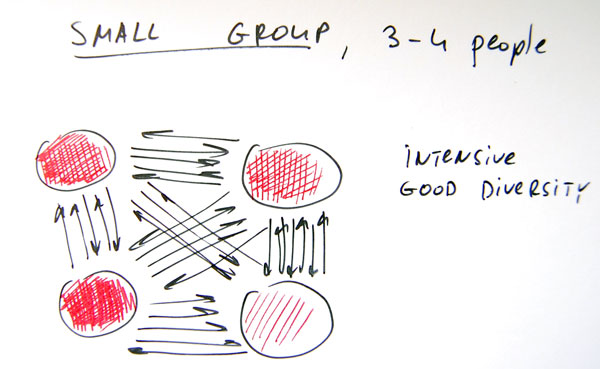 It is not a meeting, but more just a discussion. This type of communication happens all the time in pair programming, for example. Communication is very reach and dense, however, sometimes there is a lack of diversity. That is why pair sometimes bring third person into discussion to solve doubtful problem. 3 people can solve problems more effectively than 2 people. 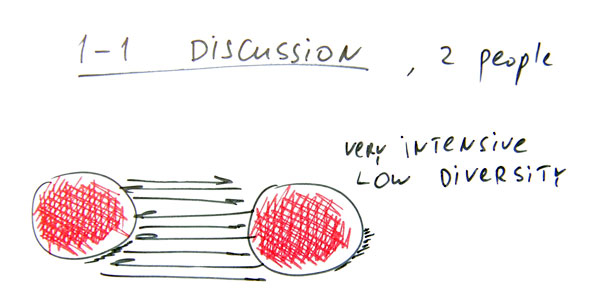 If you talk alone, probably it is better to visit a doctor. It is much more efficient to have an “inner dialog” than thinking aloud. Surprisingly, thinking is a quite good method to solve problems. For example, I like to think alone. However, sometimes you stuck and don’t see fresh ideas. Moreover, solutions that you invented may be really bad (or not as good as you think). Group discussion still the best way to evaluate ideas and select the best. 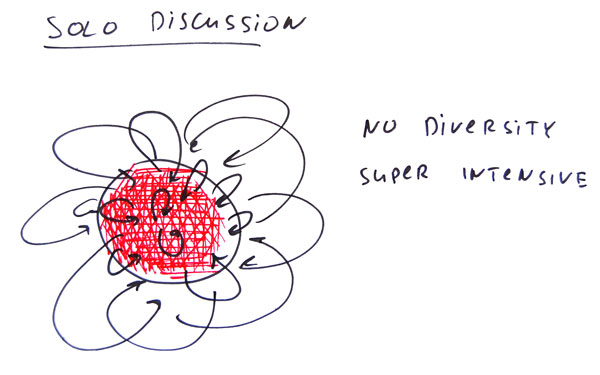 Now let’s have a look at a resulting chart. It shows meetings by 2 axis: intensiveness of communications and groups diversity. 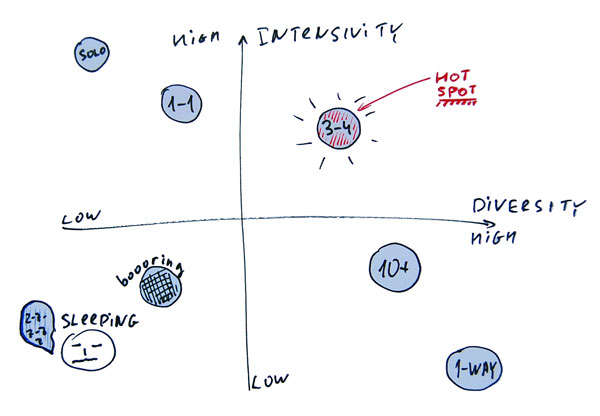 I think it is better to run meetings with 3-4 people to solve problems effectively and split large groups into many small groups. Small group has enough diversity and intensive collaboration to be effective. Several small groups have even greater diversity and potentially can create even better solution than a single small group. Sure, it will be more expensive and slow process if you invite many people. Just consider several possible options for your next meeting.