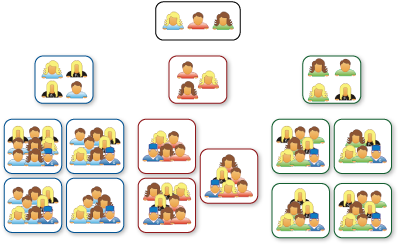 It is sometimes said that agile software development methods, such as Scrum, are ideal for small projects being delivered by small teams.

Personally I would certainly agree that Scrum is ideal for small, multi-disciplined, co-located teams, working on a common purpose.

However, these days we hear plenty of examples of larger companies using Scrum on a fairly large scale. I seem to recall Yahoo in particular once stated they were using Scrum agile project management on a project with 700 developers!

Of course it is relatively straightforward to scale Scrum up when the teams are basically a collection of small unrelated teams, each using Scrum but working on different projects. But what about when you need a very large team working on a single project, or on closely related projects in a large programme?

One technique for handling this – although I’m sure it’s not enough on it’s own by the way – is a technique called ‘Scrum of Scrums’.

It means some people need to attend two Scrums, but the Scrum of Scrums technique scales up very well and is easy to see how important information can be quickly cascaded all the way up the line on very large projects.

But the information that needs to be communicated, and the frequency of communication, shifts as you go up the line, and the process for a Scrum of Scrums needs to be slightly different from a usual Scrum.

Advice on conducting a Scrum of Scrums – by Mike Cohn

We use cookies to ensure that we give you the best experience on our website. If you continue to use this site we will assume that you are happy with it.OkPrivacy policy